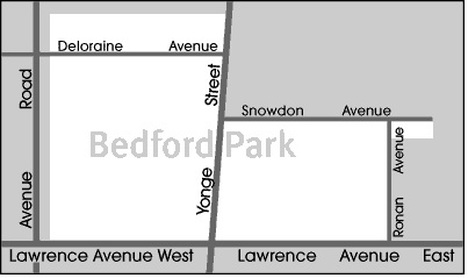 Click to view larger map
Bordered to the west by Avenue Road, to the south by Lawrence Ave and to the east by Ronan Avenue and to the north by Deloraine Avenue. Bedford Park is a family-oriented community with all kinds of great local resources and amenities that cater to people of all ages.

Bedford Park has a good mix of detached and semi-detached homes. The original housing stock was built between 1890 and 1940. However, many of the bungalows in the neighbourhood have recently been torn down and replaced with custom designed houses. Bedford Park is a highly coveted neighbourhood for home-buyers with young families. Demand for houses in this uptown neighbourhood rarely wavers. Bidding wars on houses has long been the norm here.  Families really value Bedford Park's great schools, shops and restaurants, and easy access to the subway. There are many different real estate options available in this neighbourhood.

Interested in Buying or Selling a Bedford Park Property?

We have extensive knowledge of the Bedford Park area and can help answer all your questions about this lovely neighbourhood.

Contact us to learn more about the neighbourhood and about the market conditions for selling or buying a home in the Bridle Path community of Toronto.